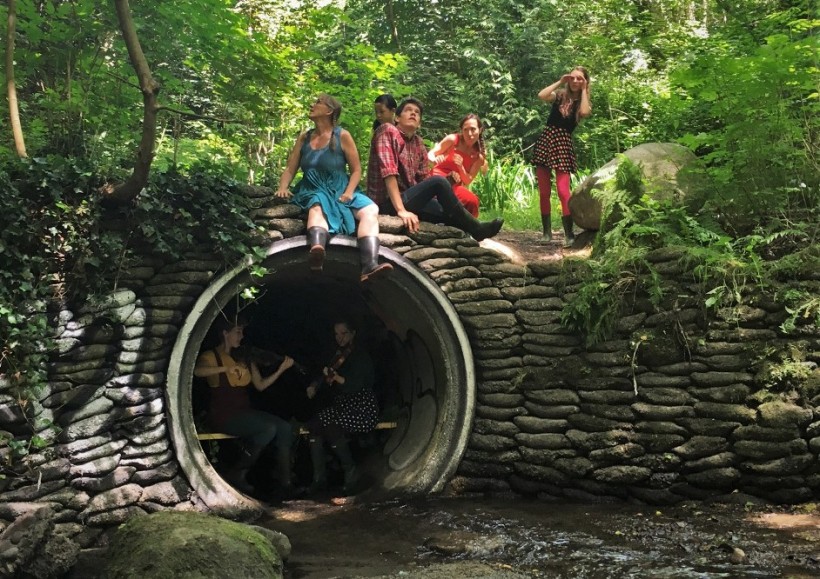 The summer has been wonderful over here at Still Moon Arts. Here is what we’ve been up to.

For two summers, Still Moon Arts has been researching, planning and rehearsing for the Still Creek: Lost and Found Performance. On Sunday, July 2, members from the community came together to witness this site-specific performance featuring original music, dance, visual art and storytelling.

The audience was taken on a transformative journey, where they stopped at one location, experienced a bit of the performance, then moved on to the next location through the Renfrew Ravine to experience the rest. Along the way, the audience heard two original pieces of music, one composed by Isaac Rosen-Purcell and the other by Martin Reisle. The audience also heard story excerpts from the Still Creek Stories book, such as the story of Ted Twetie, who lived in the ravine.

This unique performance used spaces that would otherwise been seen as mundane. For example, the old water pipe was transformed into art, and featured two fiddlers, Robin Lough and Clara Rose, who played amongst the vines. Overall, the performance received a lot of support and positive feedback. Don’t worry if you missed it, we hope to host another one in late September!

For the past 15 years, we’ve been dedicated to the stewardship and restoration of Still Creek, which flows through Renfrew Ravine. In 2014, we initiated the Street Mural Project, a project to showcase the part of the ravine that flowed through pipes directly under the streets. The mural on Cheyenne Avenue was our most recent addition to the project and the public was invited to help paint it.

Community members, artists and youth got their hands dirty and began painting on July 13. In just two days, the mural was completed, followed by a celebration in the evening. This being our fourth mural, we hope to continue this legacy in other locations where Still Creek has been buried beneath the roads. We also hope this project leaves a lasting reminder of Still Creek and the Renfrew Ravine, and sparks meaningful conversations around it.

Stewardship Tuesdays is a series of workshops that happen once a week from 6 to 8 pm every Tuesday. On July 4, we held a workshop on gathering local plant material for weaving. Through this workshop, not only did participants help improve ecological integrity of local parks, but learned how to collect natural artistic materials sustainably. Participants gathered invasive plant species, such as Himalayan blackberry and English ivy, and learned weaving techniques and styling methods.