Windermere students are calling for a crosswalk to be installed at 27th Avenue and Nootka. Photo by Julie Cheng

Grade 9 students at Windermere Secondary are petitioning for a much-needed crosswalk at 27th Avenue and Nootka.

Windermere high school is situated halfway between Rupert Street and Nootka Street and stretches from 24th to 27th avenues. The buses run up and down on both Rupert and Nootka streets, delivering a great number of students to Windermere.

The number 16 bus on Nootka stops at 23rd, 25th and 27th avenues. However, there are only crosswalks on 22nd and 29th, both of which require a detour of several blocks when walking from the bus stop to the school. As a result, most kids cross the street without a crosswalk to save time to get to class.

The students’ petition asks for a new crosswalk at the bus stop of 27th Avenue and Nootka so students and teachers can have a safe and direct connection between the bus and the school.

The crosswalk would also benefit the people who take the SkyTrain and often walk down the ravine to avoid walking beside the busy road. This new proposed crosswalk would mirror a crosswalk on 27th Avenue and Rupert and also creates a safe and efficient corridor.

You can show your support by signing the students’ petition. They have created print petitions and an online one at https://www.change.org/p/adrian-dix-cross-walk-for-27th-ave-and-nootka-st-in-vancouver. 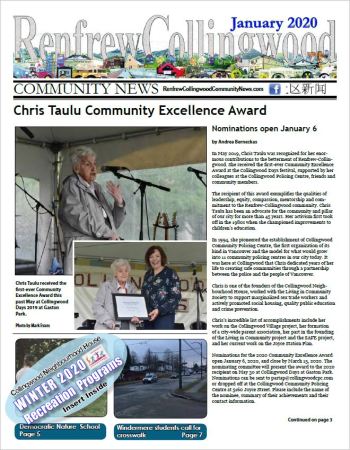 Happy new year! This issue of the RCC News full of the many wonderful people, events and programs happening in our neighbourhood.

The deadline for the February 2020 issue is January 10.

We welcome story submissions from 300 to 400 words long. Accompanying photos must be high resolution in a jpg file at least 1 MB large and include a photo caption and the name of the photographer.

The Mexican Scramble. I cannot say enough about how good this was, including those Kennebec hash browns. The best! Photo by Paul Reid

And it’s about time. Where else really has one been able to go around here for a really good breakfast(?) Since the Dutch Pannekoek House, which later morphed into James’ Street Cafe left the area, there really hasn’t been much in the way of dedicated breakfast places. And this one rocks!

Yes folks, not only was I there, tasting for myself, but I have found since that the internet too is full of nothing but rave reviews for Ham & Eggman’s.

Let’s see here what I can agree with. One person says, “My new go to breakfast spot in Vancouver!” Yes, I could definitely see that.

“The bathrooms were spotless!,” says another. Yes, I did get a chance to review those as well and they were noticeably being kept very clean.

“Right from the start, service was exceptional.” Yes, I too, undercover of course, was highly impressed by the pleasant mood and attentiveness of the wait staff.

“Chef Kristian Leidig really knows what he’s doing!” says Paniz L. Yes! Yes! In fact, doing
a little research on Chef Kristian and I find that he is quite the chef. He was presented the Vancouver Foodster 1st Place Award for his Bratwurst Benny in the #EggsBenedictChallengeYVR. Of course he did.

I’m telling you RC, these guys came to play ball.

Ham & Eggman’s has been here in RC since March 2019. Wow! Why was I the last to know? And if you haven’t been to Ham & Eggman’s yet, well, now you know that you better get yourself down there.

Before I let you go, I want to tell you about what I had. I went for the Mexican scramble. All their scrambles come with three eggs served with Kennebec hash browns and toast. The Mexican included house-made chorizo, fajita peppers and onions, aged cheddar, topped with salsa and sour cream ($15).

Let me tell you it was worth every last red cent. I guess the kids don’t know what a cent is. We used to call them pennies. I feel old.

Anyhow, get down to Ham & Eggman’s and taste for yourself. And tell me what you think of these Kennebec hash browns. I would not be going out on much of a limb by saying that these hash browns are likely the best you or I have ever tasted: light and fluffy on the inside, yet nice and crispy on the outside. I was wondering how they do that. How do you do that Kristian?