Kate Fergusson has signed on to play for the SFU Clan softball team. Photo whiterockrenegades.com

All of these new SFU recruits currently play for the White Rock Renegades 99 team. Local residents might know one of these players: Kate Fergusson, a Grade 12 student at Windermere Secondary.

SFU softball coach Mike Renney first saw Kate Fergusson a few years ago. “I watched her continue to develop into the premier first baseman in her age category,” he said.

“As a lead-off batter of one of the top teams in Canada, she is a triple threat with the ability to slap, drag or hit for average.” 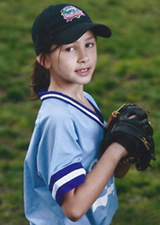 Fergusson started playing baseball at age 6 with Trout Lake Little League in Vancouver, where she played on the all-star team three years in a row and won a bronze in the district championships. At age 10, she moved over to the Richmond Islanders to play girls softball. In 2012, playing for the Richmond Islanders 98 team, she won bronze at the Canadian National Championships. She moved to the White Rock Renegades for the 2013 season.

As part of White Rock Renegades 99, Fergusson was named a tournament all-star en route to winning a silver medal at the 2016 Canadian National softball championships held in Charlottetown, PEI. She was also named an all-star at the 2014 Nationals and was a key part of the team that won gold at the 2015 National and Provincial championships.

Aside from her softball accomplishments, the multi-sport star represented Windermere Secondary in cross country, basketball and volleyball. She also played soccer in the BC Soccer Premier League.

“I am excited about the talent and winning attitude each of our new recruits will be bringing to our program,” said Renney.