“Have you come across the coyotes yet?” the walker asked me one morning.

It’s a completely different world down here, deep in Renfrew Ravine. The peace of the forest surrounds you; the sounds of the birds and rushing water soothe you. Then there are the coyotes.

I’d taken the steel stairs and timber steps leading from the Boyd Diversion entranceway near 22nd Avenue, past newly planted native plants and down to a boardwalk that winds its way alongside its creek, Still Creek.

The walkways are part of a park renewal that’s been years in the making. In October 2018, the Vancouver Park Board finally completed the construction of the new trails around Renfrew Community Park and Renfrew Ravine Park.

Renfrew Ravine Park is located between the 29th Avenue SkyTrain station and East 22nd Avenue. It’s the only park in Vancouver with a creek in a natural ravine. It’s never been culverted over, like many other Vancouver creeks, apparently because it was too far east and too steep. 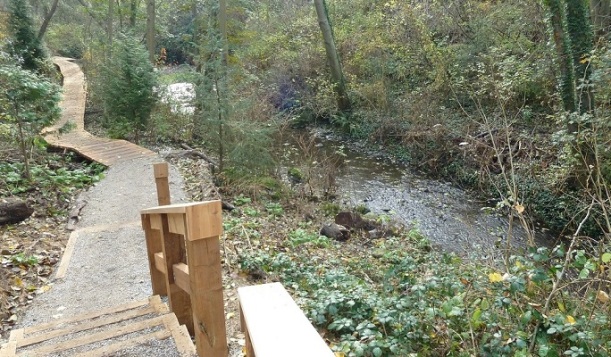 The boardwalk runs along Still Creek. New trails around Renfrew Community Park and Renfrew Ravine Park were completed in October 2018.

Members of the Still Moon Arts Society, a local arts and environmental organization that co-produces the Renfrew Ravine Moon Festival, have long envisioned a trail system around the ravine and were key in getting these trails done.

Still Moon Arts has also been instrumental in the return of chum salmon to Still Creek. This happened for the first time after 80 years, in 2012. Since then, salmon have been seen spawning behind the Canadian Tire on Grandview Highway in late October or early November.

Access to nature has been linked to enhanced mood and well-being and lowered stress and depression. So it’s wonderful that residents young and old are discovering the wonders found in this urban forest, at the creek’s edge.

A cascade of sword ferns above Still Creek.

Just before you reach 22nd Avenue in the Renfrew Ravine, stop to admire the quirky two-person stone bench. Photo by Julie Cheng

Residents of Renfrew-Collingwood can consider themselves lucky because in their neighbourhood is an oasis of nature and calm that acts as a relief from the usual city noise and energy.

The Renfrew Ravine is an urban jewel – a little bit of wilderness that is a reminder of what all of Vancouver once looked like.

This section of forest and stream sits surrounded by busy streets with car, truck and transit noise and all the other sounds that are a feature of daily life in a city.

It reminds us that, not long ago, Vancouver was a lush wilderness teeming with birds, animals and fish, and which was home to many Native peoples.

A walk in the ravine begins across the street from the busy 29th Avenue Skytrain transit station and makes its way through forest, brambles and berry bushes that border a small gurgling, stream that makes its way along the floor of the valley on the left side of the trail.

As you walk, be sure to stop and visit the Renfrew Ravine Labyrinth, a large circle of stones that imitate ancient stone circles created by peoples around the world thousands of years ago. Built in 2002, it has become a favourite meditation spot, so follow the circles and have a little meditation of your own.

Then continue down the path, past houses and along the laneway, until the path picks up again. Just before you reach 22nd Avenue, stop to admire the quirky two-person stone bench. Cross the street and go down the hill to the left of Renfrew Park Community Centre, along a path that borders a tumbling stream. Sometimes, in early spring, you can see little fish swimming in the waters just before the creek goes under Grandview Highway.

At this point you will probably notice something about yourself. Stress, sadness or weariness that might have bothered you before are now gone. That is the revitalizing power of a walk in the ravine.

The deadline for the November 2017 issue is October 10. We welcome story submissions from 300 to 400 words long. Accompanying photos must be high resolution in a jpg file at least 1 MB large and include a photo caption and the name of the photographer.