Julie Cheng’s purchases from a recent trip to Trout Lake Market include a crisp kohlrabi, which her kids love to eat raw.

September is an especially good time to take advantage of the summer harvest. For great taste and nutrition, there’s nothing better than just-picked fruits and veggies from the farm. In Renfrew-Collingwood, we’re lucky we can hop on the Skytrain and find ourselves at a local farmers market within 15 minutes on various days of the week.

My kids love it when I pick up a fresh kohlrabi from the market. They eat it raw, sliced thin. For them it’s a refreshing, yummy treat; for me it’s a good source of vitamin C (which helps your body absorb iron) and B vitamins (good for the nerves and brain), potassium and calcium.

Let’s hop aboard and meet at the market!

On the way to Trout Lake Market, check out this innovative space-saving strawberry planter at the community garden. Photo by Julie Cheng

From Joyce-Collingwood or 29th Avenue stations, take the Expo or Millennium line, heading to Waterfront station.

Exit Nanaimo station. Cross Nanaimo Street heading east and walk down the Skytrain path, stopping by the community gardens along the way.

Head north (towards the mountains) til you reach Trout Lake, also known as John Hendry Park.

If leaving from Rupert station, stop at Renfrew station and walk east along Grandview Highway (12th Avenue) for about 10 minutes. You’ll hit the north end of Trout Lake.

Trout Lake Market (every Saturday until October 19 from 9:00 am to 2:00 pm). One of the longest-running and most popular markets in Vancouver, Trout Lake Market is always jam-packed. There are often lineups for the food trucks such as Vij’s Railway Express.

It’s not all about food. The scene is colourful and festive with musicians playing and face-painting for kids and kids at heart. In addition to the fresh produce, from apples and peaches to beets and turnips, you can pick up fresh-baked bread and pies, meat and cheese, salmon and oysters, and lots more. If it’s organic, even better!

Take the Expo or Millennium line, heading to Waterfront station. Stop at Main Street station. The market is located at Main and Terminal, at Thornton Park and across from the VIA Rail Station.

Main Street Market (every Wednesday until October 2nd from 3:00 to 7:00 pm). This market is perfect for commuters heading home. Why not stop and pick up some dinner here? While here, check out the beaux-arts style VIA Rail Station, which was completed in 1919.

Take the Expo or Millennium line, heading to Waterfront station. Stop at Granville Station and transfer to the Canada Line heading to Richmond. Stop at the Yaletown-Roundhouse Station.

Yaletown Market (every Thursday until September 26 from 2:00 to 6:00 pm). Located in historic Yaletown just outside the Yaletown-Roundhouse Skytrain station, this is a new market for 2013. It’s on Mainland Street between Helmcken and Davie. Stay awhile to browse the neighbourhood boutiques afterwards or stop for a coffee or ice cream in a nearby café.

Find more info on the above farmers markets at EatLocal.org. 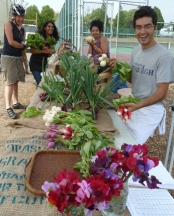 Skytrain stop: Renfrew
There’s a new urban farm in our neighbourhood, and it’s run by local students with the help of the Fresh Roots Urban Farm Society.

Zone 1. From the Renfrew station, walk east to Slocan Street and up the hill. The farm is sandwiched between the soccer field and the tennis courts.

VanTech Schoolyard Market (every Wednesday until November from 3:30 to 6:30 pm and every second and fourth Sunday from 10:00 am to 2:00 pm). Stop by for some of the best prices in town for fresh, local produce. This is Fresh Roots’ first season growing at Vancouver Technical Secondary. It is a first-of-its-kind schoolyard market garden where the food is grown and sold back to the community and to the Van Tech café starting September.

Fresh Roots is working to make the urban farm sustainable. “Healthy, local food should be accessible, and it should work,” says Marc Schutzbank of Fresh Roots. More info and photos at freshroots.ca and facebook.com/freshrootsurbanfarm.

Walk with the lantern parade that starts at 7:00 pm along the ravine down to the Renfrew Park Community Centre, where more entertainment awaits alongside the magical lantern-lit stream.

If you’re feeling hungry, stop for a slice of pizza from Ragazzi’s, at 22nd Avenue and Nootka (across from Renfrew Library). Don’t miss their Caprese Salad, made with tomatoes and baby bocconcini cheese—so simple yet so delicious.

Julie Cheng loves to eat healthy but is a bad cook, so she appreciates simple recipes. She is the editor of the Renfrew-Collingwood Community News.

While at Van Tech I purchased ingredients—picked just that morning—for a colourful, flavourful salad. It included purslane, which Marc Schutzbank of Fresh Roots says is a source of the hard-to-find omega-3 essential fatty acid that’s such good brain food. Purslane adds a robust taste and crisp crunch to the salad. I did indeed serve this with salmon and the meal was amazing. Thanks Marc!

For dressing:
Place 2 parts olive oil, 1 part white wine vinegar, 1 tsp good mustard in a jar and shake it all up.

To serve:
Place salad veggies in a large bowl and drizzle with dressing. Optional: add a half cup of sesame seeds for crunch and carmelized leeks for sweetness.